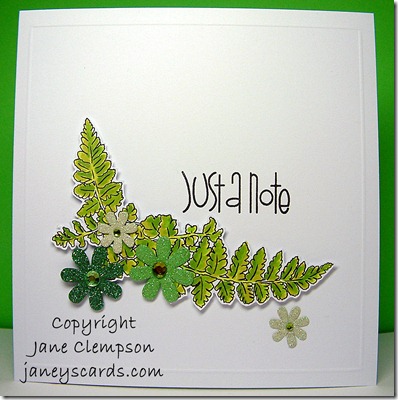 I’m an old-fashioned kinda gal, the type that still writes ‘real’ letters using paper & pen.
Actually I lied… since the invention of the computer, I have lost the ability to wield a pen in such a fashion as to leave legible handwriting on a piece of paper. I have an aunt (AKA Fav ‘H’Aunt) who can write reams of pages using a pen, yes…a pen… and write so neatly, in dead-straight lines, with no spelling mistakes, so crossings-outs, no tippex splodges, just perfectly handwritten letters. I rely on the ol’ computer to write my lengthy letters, spell-check & the trusty printer to produce my ramblings. So, to make up for my letter-writing inadequacies, I like to pop my ‘scrawl’ into handmade cards and this is my latest using my very own Fern digi. Just added a few flowers & Bob’s you’re uncle….although in this case it’s Uncle Brian…lol.
Stamp – Fern (1) – Janey’s Digi Designs
Entering it at -
Kaboodle Doodles - Use Bling
Totally Papercrafts - Hope for Spring
Cute Card Thursday – Simplify
Posted by Jane 4 comments: 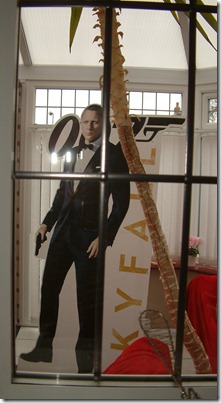 The law states that it is a parents role to occasionally embarrass ones offspring…last weekend it was favourite daughter’s turn.
Following a trip to the cinema with Mr C to see the latest James Bond movie Skyfall last year, favourite son requested the previous 2 Bond DVDs starring Daniel Craig for Christmas. 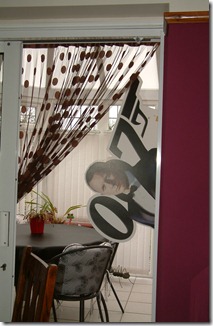 Against my will I was forced to watch Casino Royale & Quantum of Solace as a ‘Family-Bonding-Exercise’…the thought of which filled me with dread (watching James Bond not being with the family….lol)
BUT…Ding! Dong! Hello Sailor! Waft! Waft! 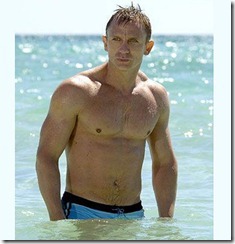 Anyway, the Skyfall DVD arrived in the shops last week and at almost every turn in the supermarket there’s a life-size cardboard cut-out of God Mr Craig, with those piercing blue eyes, watching me fill my trolley. I joked to favourite daughter that I’d like one of those cut-outs to take home. A barrage of groans and stooopid questions like ‘Why?’ were all that was needed for me to put my plan into action. 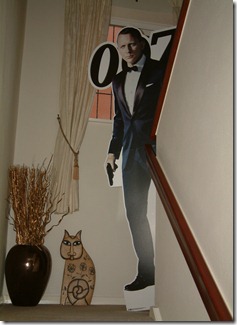 Last weekend I dropped said daughter off in town to hang out with her pals while son n’ heir & I did some shopping. Whilst in the supermarket I asked a member of staff what would happen to the life-sized Mr Craig once all Skyfall promotion was over. I can hardly bring myself to write this but… his fate lay with ‘The Compactor’ which sounded like a heinous Bond villain so I asked if I could ‘have him’ (which on reflection probably sounded soooo wrong at the time) after they’d finished with him. 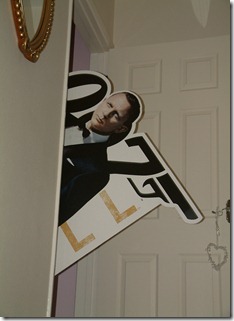 They asked which cut-out I would like so, whilst I watched over our grocery shopping bags, Oliver marched them to the other end of the store to point out which one I was after so a ‘reservation’ could be put on him. Moments later I saw Oliver appear in the distance proudly carrying a 6 foot Daniel Craig, heads turning in bewilderment as he walked pass 20+ check-outs teeming with customers. 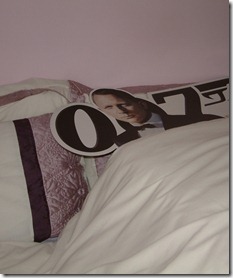 Within seconds Mr Craig was stood beside me…This was My Moment.
I rang Sophie & said we were going home and if she wanted a lift (which I knew she would….MWHAHAHAHAHA!!!!!) to meet us just inside the supermarket doorway where we would wait for her MWHAHAHAHAHA again!!!
Oh the look on her face when she arrived was PRICELESS!!!
Carrying him & 100 bags of shopping across the car-park was also priceless as was trying to squeeze 2 kids, Me, 100 bags of shopping & a 6 foot cardboard Daniel Craig into the car. 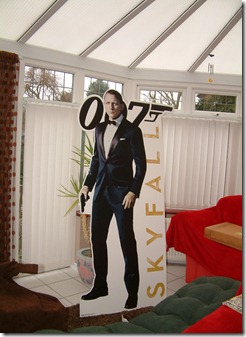 So here he stands in the conservatory, where I can watch over him thru’ the kitchen window. Much-Beloveds initial ‘cardboard-envy’ has now waned and he sees ‘Dan’ more as a burglar deterrent rather than something for me to be found fondling & drooling over on these cold winter evenings.
Anyway, favourite daughter suitably embarrassed…Tick…my work here is done. 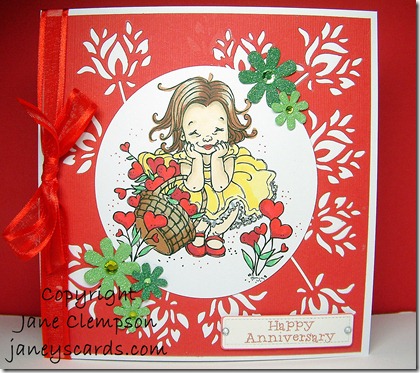 As a mother it is my role, nay the law, for me to find a variety of ways to embarrass my kids.
I mean, for goodness sake, I must get some pleasure out of life.
So today I humiliated favourite daughter BIG TIME…but I can’t reveal just how I did it yet until I have photographic evidence available…all I can say is 007….nuff said.
Further details to follow…watch this space. mwhahaha!! 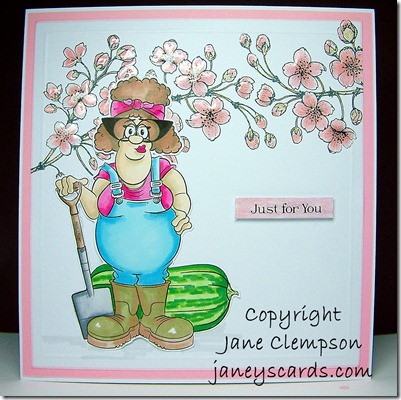 Only last weekend the Doc (AKA Doctor Digi’s House of Stamps) caught me hanging out my smalls on Wash Day, this week he found me at work, gardening with my Green Fingers & Thumbs.
The Doc’ claims it’s Deirdery with her whopper of a prize marrow but if any of my Tidy Garden clients see this card they’ll see the similarities are uncanny….lol. 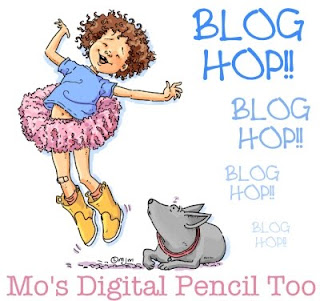 Ahoy & welcome to this months blog hop for Mo’s Digital Pencil. Our hostess is ‘The Queen of Layers’ Debby with her chosen theme of …
Babies - fairies or normal (read as human) 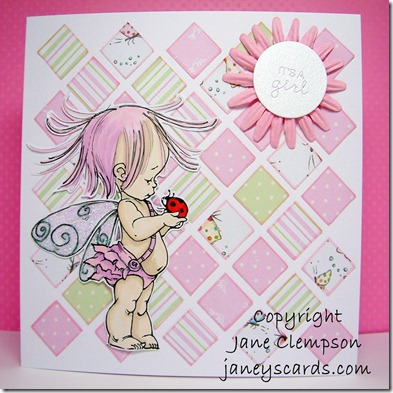 Ta-Da!
Here’s mine, Baby Fairy with Ladybug, which comes as a set of 3 adorable fairies & 3 bugs. The background is made of paper squares from the Docrafts Tulip collection.
I hope you’ll join in with our hop, there’s 2 x $5 vouchers up for grabs for 2 lucky people, to spend at Mo’s store, who leave a comment somewhere along the hop.
If you’re already on the hop then you should have arrived from Kerttu’s beautiful blog, after me it’s ‘The Queen of Embellies’ Julie.
If you’d like to start back at the beginning then you need to go to Debby’s fabulous blog.
Enjoy xx 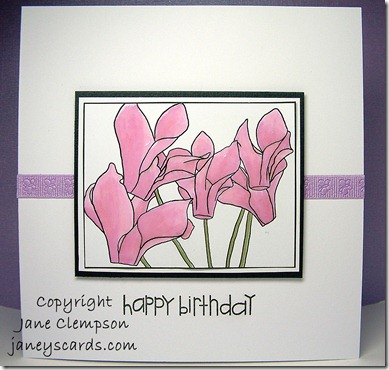 I have a pot of Cyclamen this colour that have now been flowering for 3 months. A couple of petals have dropped this week & they look like discarded ballerina tutu’s lying on the window sill.
This is another of my own creations, the Cyclamen, which you can get in my shop here.
Don’t forget to the follow Janey’s Digi Design Team blog, coz they’ve been knocking out some absolute crackers lately. Trust me…you don’t want to miss any of their amazing creations.
Enjoy the rest of your weekend xx
Posted by Jane 6 comments:

You Stole My Heart 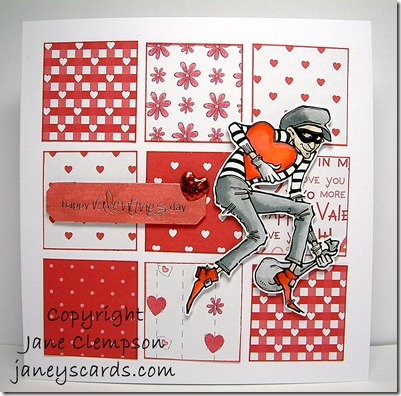 Valentines Day may have been n’ gawn but this dude is perfect for so many other occasions of lurrrrrrrrv.
Stamp - Stole My Heart (Mo's Digital Pencil)
Papers – Docrafts ‘Me to You with Love’
Entering it at -
My Time to Craft - Men Only
Digi Galore - Love
Crafty Ann's - Love
Moving Along With The Times - Love is in the Air
Charisma Cardz - Anything Goes
Divas by Design - Love & Romance
Kaboodle Doodles - Valentines
Totally Gorjuss - Love
Posted by Jane 14 comments: 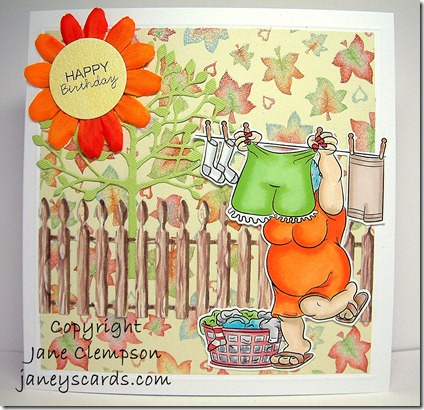 Airing ones ‘smalls’ outside on a breezy day is one of those joys of spring to look forward to…that and daffodils.
You can get Wash Day from Doctor Digi's House of Stamps.
Posted by Jane 4 comments: 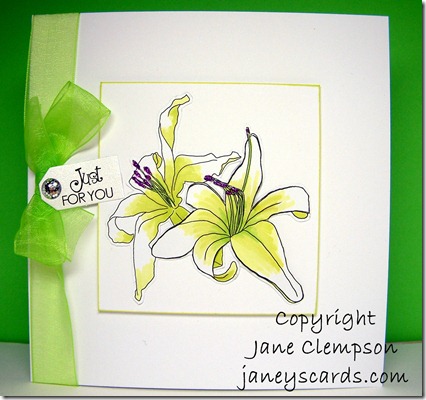 Can you keep a secret?
Promise not to tell?
*Whispered voice*
Spring’s almost here…I have evidence.
After a recky round the Tidy Garden Mr C & I are happy to report bulbs emerging, leaf buds forming & birds getting friendly n’ all that.
Now…keep it to yourself until the coast’s clear.
My card today is made using one of own designs, Daylily Beth, that you can get from my shop here at Janey’s Digi Designs.

Entering it at -
Moving Along with the Times - Only Girls Allowed
Posted by Jane 9 comments: 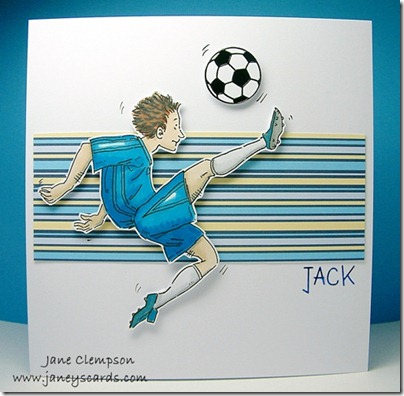 Sunday’s almost upon us and for Mr C & I it means one thing……ffffffffffreeeeeeezing on the touchline watching our son Oliver play football. He’s been given the name Ollie Beckham as he’s a dab hand at corners and long-range free kicks straight into the goal.
I have to confess I’m hoping there will be heaps of rain & snow tomorrow, the pitch will be too soggy or frozen and the game will be called off. What ever you’re up to, stay snug n’ warm. I’m off to do a ‘bad weather’ dance.
Soccer Dude – Mo’s Digital Pencil (Link to old shop)
Posted by Jane 5 comments: 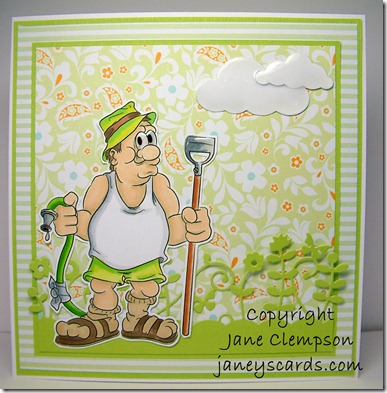 It was about this time last year that news reporters started looking at the state of our water supply here in Blighty, with dried up rivers & depleted reservoirs. Within 2 months we were plunged into a nationwide hosepipe ban.
Cue 365 days worth of ‘ocean-filling’ rain fall.
Gardening Gus from Doctor Digi's House of Stamps can put that dodgy hosepipe back in the shed and while you’re there you might want to dig out your rainmac.
Posted by Jane 6 comments: 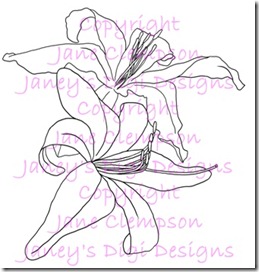 My latest release is in honour of a fellow flower-addict and friend known in the gardening blogging community as Beth ‘Queen of Daylilies’.
Her blog, aptly named ‘Daylily Soup’, is like a wander through paradise and her addiction to Daylilies is obvious.
I dare you to visit her garden blog without being left inspired and your purse a little lighter with your own found addiction.
Here’s a couple of photo’s just to tease you. 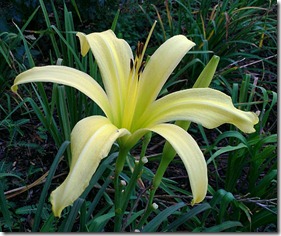 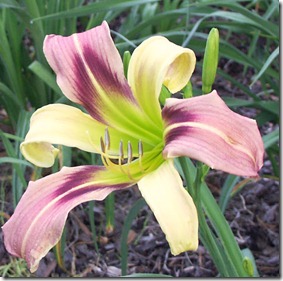 This is just a miniscule snap from Beth’s garden…visit her blog at your peril….mwhahaha! 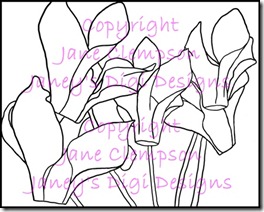 I bought this Cyclamen back in November of last year. It was flowering its head off then & it’s still going strong almost 3 months later. 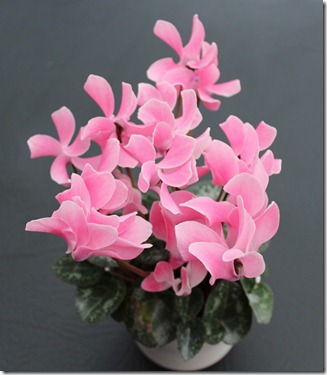 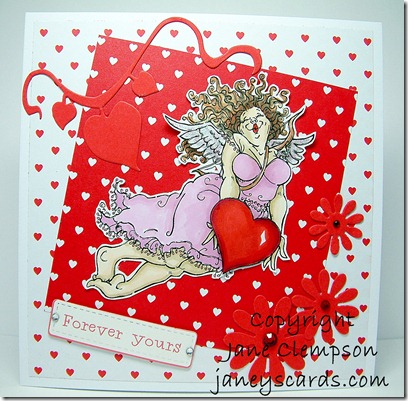 Mo (AKA Mo’s Digital Pencil) has an uncanny knack of capturing all of my great assets when creating her fabulous digital images. Sometimes I thinks she makes the odd faux pas when clearly she’s been on the sherbert…I mean honestly, where do I keep those wings under my anorak?
But in general, the likeness is awesome…chubby knees (tick!), mahoosive basoomas (tick!) and electrified hair (tick!) 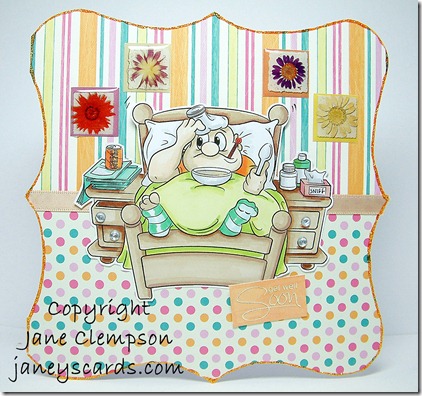 Poor chap.
With the weekend looming, his wife’s downstairs putting the finishing touches to his ever-growing ‘To Do’ list.
The sight of it earlier had bought him out in a cold sweat but now it’s full-blown man-flu.
He’s a man for goodness sake!!!
One job at a time.