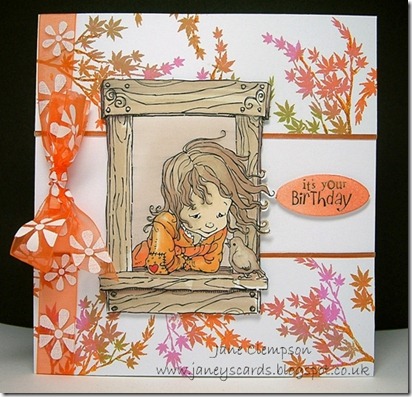 When not up to mischief indoors, you will find me in the garden (or someone else's) and it was in someone else's garden last year that I struck up a weekly rendezvous with Robin. Not sure if Robin was male or female as all robins pretty much look the same, but our meetings became the highlight of my week. I would be greeted every Wednesday with a robin-style ‘Wotcha!’ from the branch above my head and then as I tended the flowerbeds on bended knees, Robin (for want of a better name) would hop around my hands picking out the tasty insects I’d unearthed. The icing-on-the-cake happened early summer when Robin introduced me to its 2 chicks that it encouraged down onto the ground where I was working to feed 2 feet from my hands. It’s a wonder I get any work done sometimes…I really do have the best job ever!
Stamps - A Little Bird Told Me (Mo's Digital Pencil)
Oriental Awakening (Inkylicious)

Lovely card, Janey. That is so sweet about the Robin...
Hugs
Kim M
x

Gorgeous card Jane, I love that image and beautiful colour scheme.
Awwww I loved to read about your Robin friend, reminds me of The Secret Garden!
I hope you have a good day
Sue

Awww..thats a nice story Jane..reminds me of the time I was gardening back in 62, when I yanked a worm out of the way and the thing kept coming and coming...it was the longest worm I have ever seen, we dont have snakes here so it must have been a worm, now that would have kept robin and family for weeks..gorgeous sweet card too..love the image, just adorable,fabulous background and bow.

Oh wow Janey, absolutely precious card! Love the wonderful image and the DP is just perfect!
P.S. If Robin had two chicks, I'm pretty sure its a girl!

What a delightful card - a happy way to start my morning! So pretty! I love this image and you have showcased it perfectly! Wishing you a happy day!

Gorgeous card Jane and what a wonderful image.
luv
Debby