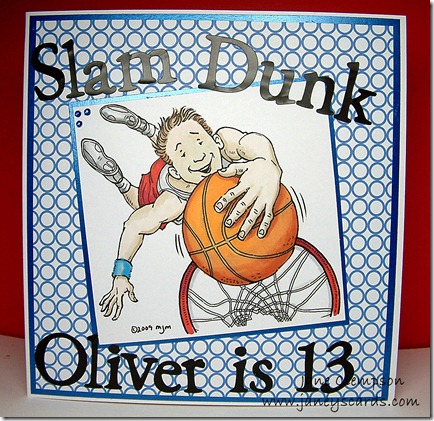 Thankfully my son wanted something other than video, TV & computer games (yawn-city…Zzzz Zzzz) for his birthday last weekend…he wanted a ‘proper’ basket ball net & stand. The basket ball ensemble is ENORMOUS and our plan for him to be able to wheel it up & down the drive onto the street to play with went out the window within seconds of its erection.
The base is filled with sand and it’s so heavy even Mr Muscle C struggled to shift it, so he dragged its leaden weight back down the drive against the house. As it’s too heavy to be dragged on a regular basis backwards & forwards, Mr C and birthday boy went off in the car to buy a heavy duty padlock & chain to attach it to the house wall for fear thieves might steal it. Just after he left a gust of wind swept down the drive sending it crashing to the floor…thank goodness the car wasn’t there, I think it would have chopped it in half…lol.
Anyway, there it is outside the front door to annoy all the neighbours with the bang, bang, banging & thud, thud, thudding that only balls against walls & windows make.
Stamp – Slam Dunk from Mo’s Digital Pencil
Posted by Jane

Such a fabulous image, perfect for your son's birthday.
Have a great Sunday
Sue xx

Wonderful news that your son has interests other than electronics! Super awesome image and card for the birthday boy! Happy Birthday Oliver!

Fabulous card Jane, I bet Oliver loved it & I hope he had a wonderful birthday :)
Hugs
Tracey
xx