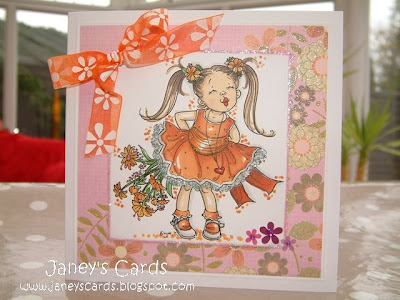 There's been huge excitement in Essex over the past 12 hours with reports that there was a loose lion roaming farmland. Visions of a what a loose lion would wear sprang to mind: fishnet stockings, a scarlet boob-tube and scuffed, white heeled stilettos maybe? On Twitter, folk were suggesting the cast of TOWIE should be thrown out as bait to lure the beast out of hiding (lol) but now the search has been called off amid suggestions that it was in fact a dog that was seen and NOT a lion. Oh...the disappointment!
Here's a card I made a while back, I'm off to scrub off the 3hr weedkiller that's just backfired on my feet. Note to self....Do Not Use Weedkiller When a Gale Force Wind's Blowing!
Stamp - Kisses - Mo's Digital Pencil
First Edition Dessert Blooms papers
Promarkers, sequin flowers, ribbon from Hobbycraft
Posted by Jane

This is adorable, Jane! Love the DP and Mo's cute image! Terrific coloring!

I dont think I would venture near the woods till I was sure there was no lion..the boob tube and fish net stockings would be too much for me..lol..fabulous card Jane, love this image and her gorgeous orange dress..beautiful.

Gorgeous card Jane, such a great image and I love the colours

eugh - hoping your feet dont rot and drop off lol loving the card another fabby Mo image. Hmmm dont know how I missed yesterdays post but I thought that image was me then - ah no mistaken - no muffin top !! love your layout xx

hmm, I think fishnet stocking might be a little over the top! I do believe they prefer control top panty hose. Love, love your sweet card! You coloring is absolutely amazing!

When I saw this my little brain thought on the kissa! Fanboy stuff Hun. X