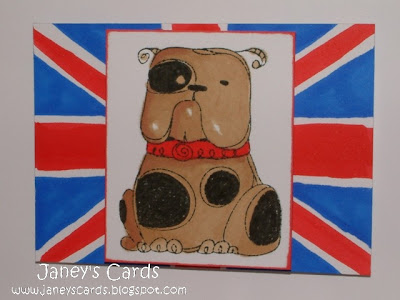 Oh the memories of the classic school playground game British Bulldog. There'd be one person who was 'it' in the middle and everyone would start at one end of the school yard & then try n' 'leggit' to the otherside without being caught. It's probaly banned in schools now...health n' safety gawn mad!
Those were the days....sigh! 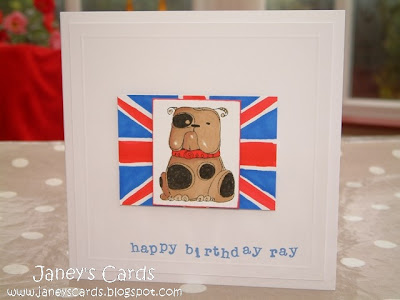 My son's ex-primary school (thank goodness he's left their now!!) banned everything and the kids were bored senseless. What happened to conkers, long lengths of elastic skipping, tag games & skipping ropes? We laughed so much at school and played in big happy groups.
Shoot! I'm sounding old...off to hang out in a bike shed!

Email ThisBlogThis!Share to TwitterShare to FacebookShare to Pinterest
Labels: Inkadinkado

Love this fab british icon, very cute. a great card, I agree about madness in the school yard, no wonder kids get up to mischief when they can't enjoy wholesome fun.
Sandy

Fabulous card Jane, and totallyagree with you,all the fun has gone from 'Games at school'...now our lot take stupid toys that get pinched,they dont run[not allowed it is dangerous]all the playgrounds have rubber floors, and you can hardly move on them..it has all gone..sad really.

Lol we are definately pyschos or pychic not sure which I was only thinking of this game the other day as I coudnt remember the rules - knew there was lots of running about but thought questions were involved - lol - think I'm thinking of something else :-) xx

This turned out great. I like this sweet little guy. I get frustrated too. We used to have a blast at recess. Sound off all you want.