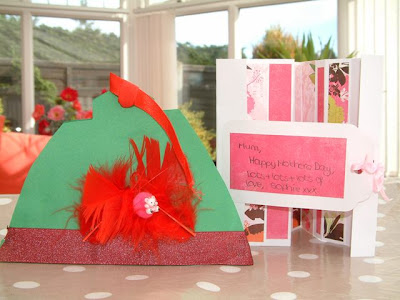 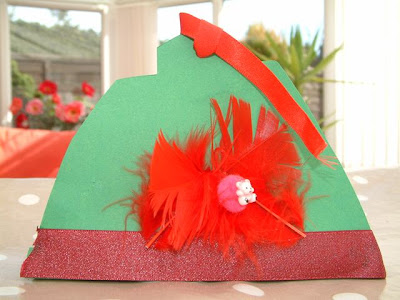 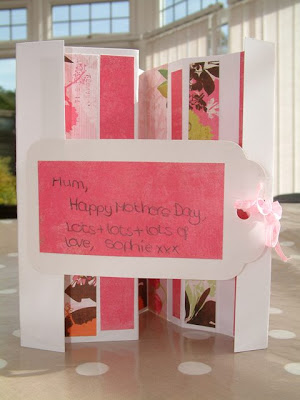 These are the awesome cards my fabby kids made for me this Mother's Day. Oliver's Handbag card was tinged with tears as his was made at school & had got squashed on his way home. He was so upset, bless, but we got it fixed & he wrote the most beautiful message inside...(choking-lump-in-throat moment!!)
We were supposed to get up early on Sunday for a football match but at 7.50am I was given strict instructions to remain snuggled up & await breakfast in bed. 40 mins later with an eerie silence from downstairs, no rattling of cups or clinking of plates I called down to see if I should get up. A resounding "NO!!!" was followed by footsteps up the stairs & an order to close my eyes. It turns out that Sophie had fogotten to make me a card & was frantically putting one of her masterpieces together. I don't know where she gets her ideas from...def' not me...it's a concertinaed card with different size folds, each section has its own strip of paper, with a message label joining the two sides together with a bow...Genius!!!
Breakfast? Got up in a mad rush & made mine & everyone elses!!
Hope you all had a great weekend!
XXX
Posted by Jane

wow what lovely cards at least you got hand made ones mine was slop brought but still lovely.I had a lovely day did nothing but craft just going to put them on my blog now see you soon
Jacki xx

Awww, how sweet, I can see they both take after they very talented mother :D

& you have been soo busy since my visit & all the cards I've missed are fabulous.

Stars in the making there I see - though have they raided your craft room!?.
Sarah

Awww....happy belated Mum's Day over there!! Your kids are a treasure!