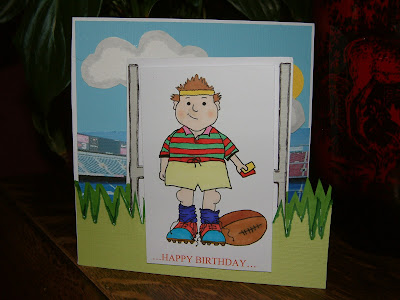 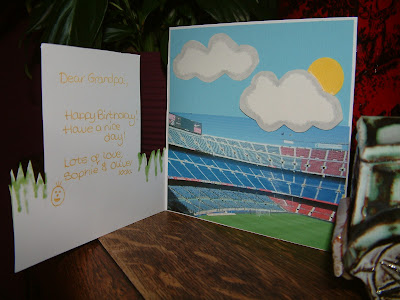 I'm throwing in the towel...retiring!
Adieu! Auf Wiedersehen! Adios!
It comes to something when your kids cards start to give your own a run for their money!
To save face...I'm off...Later!!!
This little gem was made by my dear, darling, little buggers, children for their Grandpa's Birthday.
He loves rugby so they made rugby posts & stuck George from Charmed Cards and Crafts in between, cut out a grassy surround, stuck blue paper on the inside with clouds & a sun & then "borrowed" a picture of a stadium from Google & stuck it on the inside too! How darned clever are they!!! (WAH!!!)
Thankfully...no ProMarkers were hurt in the making of this masterpeice!!

So proud (teensy bit jealous!) so Entering it at -
Dotties-Wonderful-World - Anything Goes with Blue (hope the inside is blue enough to enter!)
Posted by Jane

Fabulous card, no wonder you are proud - your lil angels obviously take after their Ma for creative talent :)

Hope you're having a great week.
Hugs
Tracey
xx

If you're retiring from being such a smart-ass, don't do it. I like you just the way you are.

Your card is so adorable! Love the way you put it all together. I'm so glad your promarkers are safe. For now.

ditto above lol, great card (who ever made it lol )

Oh wowzers! Your children are so clever! I love this card and I love it when children have a go with our images. I must draw more Georges they come up again and again. Please thank your children for entering, I hope we see them back...oh and don't give up! remember they got their skill and inspiration from you :)