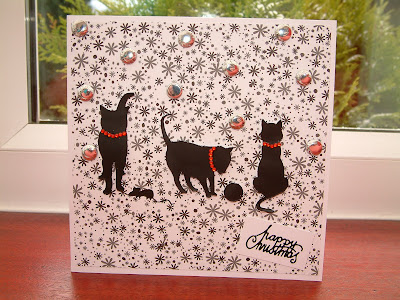 Apologies for the rubbish cracker joke yersterday. I have now found what is apparently the Best Joke In the World according to the University Of Hertfordshire which is scarily up the the road from me...to think that eminent peeps are researching such things is a joke in itself!! Anyway...here it is...brace yourselves!
***
A couple of New Jersey hunters are out in the woods when one of them falls to the ground. He doesn't seem to be breathing, his eyes are rolled back in his head. The other guy whips out his cell phone and calls the emergency services. He gasps to the operator: “My friend is dead! What can I do?”
The operator, in a calm soothing voice says: “Just take it easy. I can help. First, let's make sure he's dead.” There is a silence, then a shot is heard.
The guy's voice comes back on the line. He says: “OK, now what?“
***
To find the Best Joke From Your Country go HERE.
My card today was made using some gorgeous peel-off cats mounted with foam pads with red gem collars, the DP is from DCWV and finished with silver card candy snow!
Entering it here -
A Spoon Full of Sugar - Christmas Card﻿
Posted by Jane

Awww this is so cute - my mum would love this card!!

This would be a fabulous entry into the Top Tip Tuesday Christmas Inspired challenge this week - you can enter as many times as you like!

Hope to see you there! Leanne xx

Hee Hee just read all the jokes...Super card..my fiend Barb is a cat fanatis she would loves this.
Luv CHRISSYxx

Love the card. Of course, I love cats...so LOVE THE CARD!