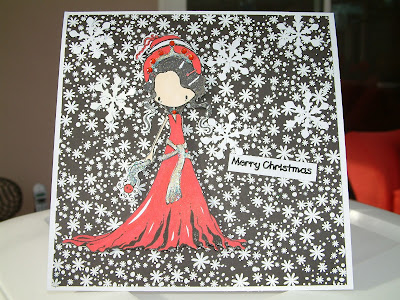 It's Official...Christmas is almost here. I have all the tell-tale signs...box of After Eight Mints securely stashed away at the back of the tallest cupboard, red Poinsettia in position (already losing its blooms!!) and several Xmas cards dangling from threads of blu-tak on the wall.
We're all going to a Disco in a couple of weeks (Oliver's football club). It's been a long time since Neil & I hit the Dancefloor, in fact I'm more of an On-Looker...you know the sad, geeky ones in Grease who sit there tapping thir feet...that's me. But this year I think I may go mad & revive some Moves-Of-Old. I'm thinking Break-Dancing, maybe a spot of Morris Dancing or some John Travolta Jives...wot jet fink?
My Xmassy card today is for a Gothicky friend using an awesome digi from Tiddly Inks, simply coloured with ProMarkers & Stickles, with red gems on her crown. I think the DP is from DCWV with X-Cut punched snowflakes.
Entering it at -
Tiddly Inks Challenge - Christmas
Posted by Jane

Super cute and definitely a little 'goth'. I love that snowflake paper. That's fantastic!
And yep, a little bit of the Bee Gees will put some swing in your step! My hubbies favorite group other than Journey! They don't make music like that anymore. . . .it's a shame!

This card surprised me! Wait a minute - is this the real Jane?

I won't believe it unless I see pictures of the break dancing. Ahem...better yet, a video. Start uploading.

so pretty!!! thanks for joining us at TI this week!!

Oh this is pretty!! Love that paper for Goss! Thanks so much for playing at Tiddly Inks this week!!
melissa

I really like the way you put this card together. Love the colors. so glad you could join us this week at Tiddly Inks!

Awesome card! Love the black background paper. Thanks so much for joining us at the Tiddly Inks challenge.

I love your description of the christmas cards hanging on the wall....too funny!!
And definitely break dance...then post pictures. :)