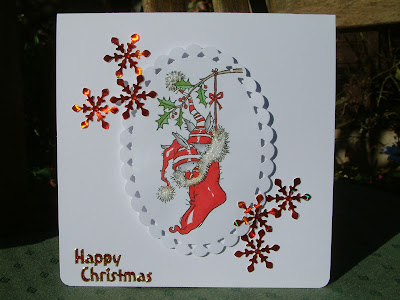 BRRR!!! It's cold out today...but at least the sun's shining!
These Wabbits have got the right idea...snuggled down into a giant sock...I may have to get one of those single, giant boots that they try & sell to the elderly to pop their toesies into to keep warm whilst siiting in their armchairs. I nearly bought one for my MIl a couple of years ago but I had visions of her "hopping" in to the kitchen to make a cuppa still wearing "the" boot & wondering why I was too tight to buy one for "the other foot". It may have been worth it for comedy value...only joking!!!!
So these cosy Wabbits are from LOTV coloured with PM's, with 3d Glitter-paint sock fluff & punched holographic red snowflakes. mounted on to a Nellie Snellen oval framed backdrop.
Entering it at -
Frosted Designs - Die Cuts
Fussy and Fancy - Winter Wonderland
LOTV - Winter Fun
The Crafty Pad - Christmas Theme
Totally Gorjuss - Sparkle
Posted by Jane

Your card is so cute. That image is adorable and your coloring is so pretty. Love the little snowflakes you've added, too.

Such sweetness!! I love your darling image and the way you did the white on white!! Thanks for taking on our die cut challenge at Frosted Designs this week!!
bArb :)

Adorable for sure! Love those bunnies & your card is the sweetest thing EVA! Thanks so much for showing us YOUR WINTER WONDERLAND creation at Fussy & Fancy! Happy Holidays!!! Hugs- Corry

Cute! What a wonderful card Thank you for playing at The Crafty Pad! Hugs Tina x

ANOTHER Beeeeeutiful Christmas card Jane I am never gonna catch up with you (unless I give up work & hubby won't let me lol).

Your wascally wabbits are outwageously cute!!!

Aww love this card - what a great image. :)
Thanks for sharing it with us at the Crafty Pad challenge this week. ;)
xxDebbie The Crafty Pad Stamp Designs

Beautiful card Janey and a great choice of stamp.Thanks for taking part in this weeks LOTV Challenge!
Clairexx

Great Card, makes me want to coozy up! Thanks for playing along with Frosted Designs. Esther~DT